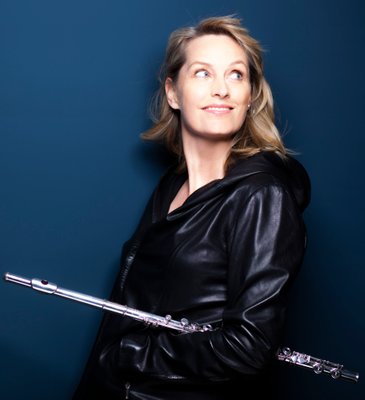 ....” Janne Thomsen was one of the real stars of the evening. Pure pleasure of
playing, technical perfection and a certain radiating factor sparkled through her

The Danish flautist Janne Thomsen has established a reputation as a sought-after soloist, appreciated for her warm expressive sound with a wide range of differentiated colours and dynamics, depth of expression and exuberant vitality.

Janne began her musical studies in Denmark at the age of four and later became the Danish “Young Musician of the Year”. On completion of her studies at the Royal Academy of Music in London and the Paris Conservatoire, she continued to win prizes at international flute competitions in Prague, Paris, Bayreuth, Rome, Vienna and Boston. Janne Thomsen was also awarded support from the Augustinus Foundation and the Foundation of Her Majesty Queen Margrethe II and Prince Henrik of Denmark. For her contribution to music she has been awarded an ARAM - associate of the Royal Academy of Music in London.

From 2004-2007 Janne Thomsen taught at the Mozarteum in Salzburg and continued 2008-2010 at the Hochschule für Musik in Lucerne. She is today based between Germany and Denmark, the latter, her native country, where she is the founder and artistic director of -Holstebro International Music Festival -” Klassiske Dage” - , a festival, where she devises innovative programmes and which has grown in stature, receiving high critical acclaim since its start in 2005. Janne Thomsen was for this achievement awarded the Holstebro Cultural Prize, as well as the Lions Club Prize.

“ Thomsen's playing is truly lovely. Her warm expressive and infinitely varied sound, with its astonishingly wide dynamic range, and her transcendental technique actually seem to hold a magnifying glass up to the music”
Pan Magazine, British Flute Society

” Janne Thomsen was one of the true stars of the evening. Pure pleasure of playing, technical perfection and a certain radiating factor sparkled through her playing and stage presence”

„Janne Thomsen is a treat for eyes and ears. She is a phenomenon. She steps on stage and an almost palpable energy emanates from the her … After 2 hours she concludes by unloading a never ending applause.“

“The Danish flautist Janne Thomsen is a magnificent rich-toned soloist, full-bodied and clear, and her range of timbre extremely wide"

"A clear, brilliant sound by the Danish Janne Thomsen, virtuosity and expressive stage presence, .... The performance showed such interesting interpretative scope with themes illuminated from distinctive aspects ..... vivacious, terrifically-paced thematic and efficacious accentuated rhythms. Janne Thomsen plays with incredible vitality, wonderfully differentiated expression, agility and elegance. She attaches great importance to the equitability with the orchestra members, always with eye contact and even seems to smile while playing the flute. Now and then you had the feeling that she musically flirted with the orchestra. Hence the sparkling interpretation of the two concertos. Wonderfully and beautifully ornamented with crisp trills in "Il gardelino" - ceremoniously chirping. The slow mouvement sounded like a dream ...“